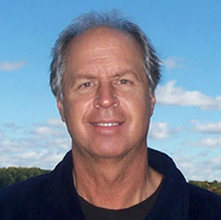 Born in Midland, Michigan in 1949, Doug loved music and became an accomplished clarinetist where he was the principle clarinetist for the All State High School Band. He didn’t start to study art until the age of 20 and found it came to him quite naturally.  He received a BA from Central Michigan University in 1971 and an MFA from Michigan State University in 1978.

Soon after, Doug left the cold weather of Michigan and moved to Houston to pursue a career in fine art doing realistic figure drawings. While in Houston, he was represented by the prestigious Hooks-Epstein Galleries, had a one-person show at the University of Houston and won many awards in numerous national and wide-regional juried shows.

In 1985 Doug discovered illustration and found that it was a better fit for a realistic artist. He went back to school at the Art Institute of Houston to learn basic principles of graphic art so he could better understand the industry he wanted to work in.

In 1987 Doug moved to San Diego. He has been a member of The Society of Illustrators San Diego since 1990 and was on its Board of Directors during 1992 and 93.  He became close friends with many members and this is where he learned to excel in the illustration business.  Even though he moved away from San Diego in 2001, his friends from SISD have continued to invite Doug to be a member of their group, which he is still a member.

Doug has had a flourishing career for more than 30 years.  He started out spending several years doing many editorial and publishing projects, but through his love of nature, Doug’s specialty has evolved into painting realistic watercolor illustrations of food and botanicals for packaging and advertising. He has been one of the premier artists in his field and has painted packaging illustrations for many large prestigious companies including Alberto Culver, Clairol, Frito-Lay, Wal-Mart, Unilever, Victoria’s Secret, Shaklee, Continental Mills, and Bath & Body Works.

In spring of 2001, Doug and his wife, Victoria, moved back to a home on Green Lake in northern Michigan, where they enjoy living in the beauty and peacefulness of nature.

Doug is an avid tennis player.  Since moving to Michigan he has become involved with USTA tennis and has captained many teams.  Three of them have competed in the State Championships and one of his senior teams advanced to the Midwest Regional Tournament.